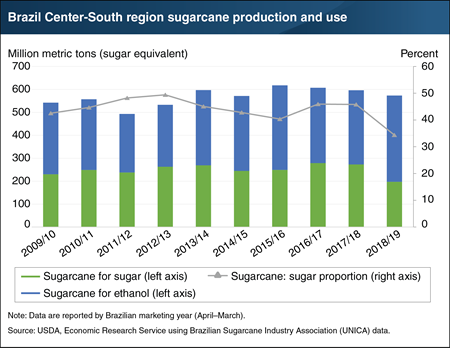 In 2017/18, global sugar production reached record levels, leading to a sharp and sustained drop in sugar prices on the world market. Lower global sugar prices have translated to diminished returns for sugar producers. Brazil’s sugarcane sector has adapted to low returns for sugar exports by processing a higher share of sugarcane for ethanol production. In 2018/19, only about one-third of sugarcane harvested in Brazil’s main Center-South Region was crushed for sugar production—a substantially lower share than in the past decade. The remainder was processed into ethanol. This change in sugarcane usage represents a 26-percent decrease in sugar use relative to 2017/18 and a 16-percent increase in ethanol use. In Brazil, hydrous ethanol has increased its market share against gasoline for the past several years, as most Brazilians drive flex fuel vehicles (FFV)—cars that can use both gasoline which includes ethanol in its blend or pure hydrous ethanol. This extensive use of ethanol is economically feasible as ethanol has grown increasingly competitive against rising gas prices, particularly in the Sao Paulo and Center-South fuel markets, which are close to sugarcane ethanol processing facilities. Increased ethanol production in Brazil also influences the U.S. ethanol market because Brazil is a major importer of U.S.-produced ethanol. This chart appears in the ERS Sugar and Sweeteners Outlook report released in June 2019.