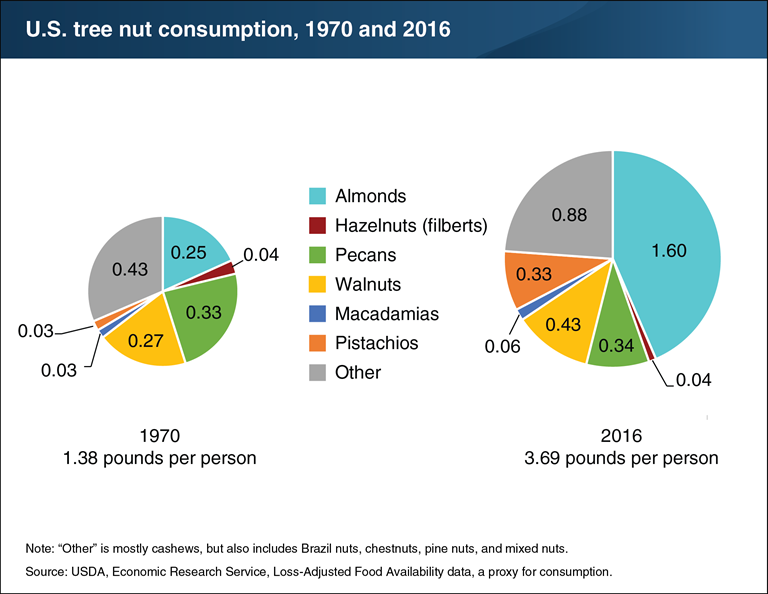 Over the past five decades, Americans’ annual consumption of tree nuts has grown from 1.38 pounds per person in 1970 to 3.69 pounds in 2016, according to ERS’s Loss-Adjusted Food Availability data series (a proxy for consumption). Almond consumption experienced the largest growth, increasing by 1.35 pounds per person from 1970 to 2016. Consumption of pecans and walnuts averaged a little over one-third of a pound per person, remaining relatively stable throughout the years. Pistachios have steadily increased in popularity since 1970, reaching 0.33 pound per person in 2016. Consumption of other nuts (cashews, Brazil nuts, chestnuts, pine nuts, and many nut mixes) doubled, reaching almost a pound per person in 2016. Cashews make up the largest share of this grouping. Promotional programs that tout the nutritional value of nuts, including their beneficial levels of vitamin E and omega fatty acids, and increased awareness and demand for nut milks have likely contributed to the growth in per capita nut consumption. The data for this chart come from the Loss-Adjusted Food Availability data series in ERS’s Food Availability (Per Capita) Data System.