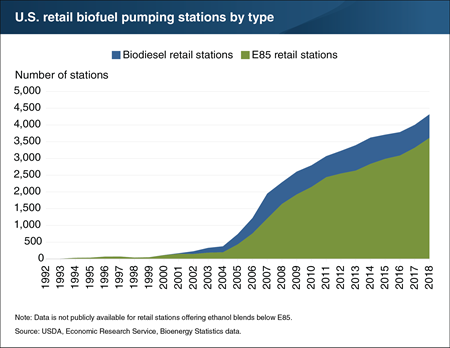 Ethanol is the main agriculturally derived bioenergy product in the United States, accounting for 9.2 percent of the gasoline consumed in 2017. It is often referred to in terms such as E10 or E85. Fuel that is 10 percent ethanol and 90 percent gasoline is referred to as E10, while E85 is 85 percent ethanol and 15 percent gasoline. Ethanol availability beyond the nearly ubiquitous E10 blend is limited. Data for stations offering less than E85 ethanol blends is not publicly available, but E10 blends are mandated in several U.S. states. There were 3,617 retail pumping stations offering E85 in 2018, partially because ethanol sales of blends higher than E10 at the pump are limited to stations that operate dedicated E85 pumps and tanks. Stations use pumps to blend fuel types from multiple tanks to achieve the desired blend. Similarly, biodiesel was available at 702 retail pumping stations in 2018, down from a peak availability of 783 in 2014. While agriculturally-derived bioenergy fuels (E85 or biodiesel) are available at a total of 4,319 pumping stations, they are significantly exceeded by non-agriculturally derived alternative fuel types. Primarily in the form of electricity, alternative fuels not derived from agricultural sources are available at over 66,000 of the roughly 160,000 retail pumping stations in the United States. This chart is based on data from the ERS U.S. Bioenergy Statistics data product, updated in December 2018.