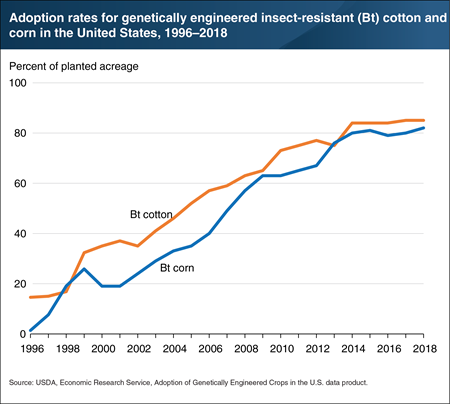 A genetically engineered (GE) plant has had DNA inserted into its genome using laboratory techniques. Some of the first GE crops were created by inserting genes from the soil bacterium Bacillus thuringiensis (Bt) into corn and cotton plants. Bt creates organic, crystalline insecticides that become concentrated in plant tissues, so these GE crops gained insect resistance. Demand increased quickly for Bt corn and cotton after their commercialization in 1996. Five years later, about 37 percent of cotton acres and 19 percent of corn acres had been planted with Bt seeds. By 2018, Bt adoption had increased to 85 percent of cotton acres and 82 percent of corn acres. Early differences in the adoption rates of these two GE crops may be related to the fact that insect infestations tend to be more severe in warmer climates. Cotton-growing areas are concentrated in the Southeastern United States and the Southern Plains, which tend to be warmer than growing areas in the Midwest, where most U.S. corn production takes place. This chart appears in the December 2018 Amber Waves data feature, “Trends in the Adoption of Genetically Engineered Corn, Cotton, and Soybeans.”