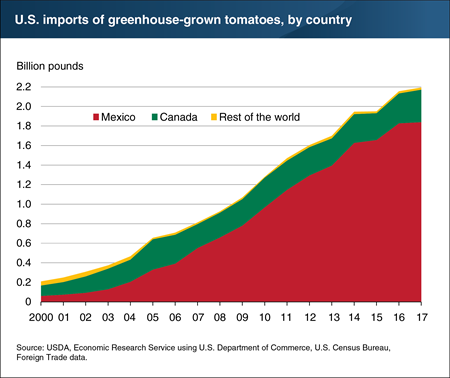 As the U.S. fresh-market tomato sector has evolved to provide an increasing volume and variety of globally sourced offerings, U.S. per capita availability of fresh-market tomatoes has steadily risen. Major factors shaping the fresh tomato market include growing numbers of imports, changing consumer demographics and tastes, and emerging production technologies. One illustration of the convergence of these drivers comes from the rising availability of greenhouse-grown tomatoes, which provide year-round access to more diverse tomato varieties than were previously available. Since 2014, greenhouse imports have made up approximately 55 percent of total fresh tomato imports into the United States. Prior to 2005, U.S., Mexican, and Canadian growers each contributed about 300 million pounds of greenhouse tomatoes annually to the U.S. fresh-tomato market. Since then, Mexico’s share of the greenhouse tomato market has grown sharply, averaging 35 percent annual growth, in parallel with expanding shipments of field-grown fresh tomatoes from Mexico to the United States. In 2017, imports from Mexico accounted for almost 84 percent (1.8 billion pounds) of the greenhouse-tomato volume coming into the U.S. market. Imports of Canadian greenhouse-grown tomatoes have remained at about 300 million pounds. This chart appears in the May 2019 ERS Amber Waves article, “Imported Greenhouse Tomatoes From Mexico Illustrate the Growing Diversity in Fresh-Market Tomatoes.”