No-till and strip-till are widely adopted conservation practices, but are often used in rotation with full-width tillage 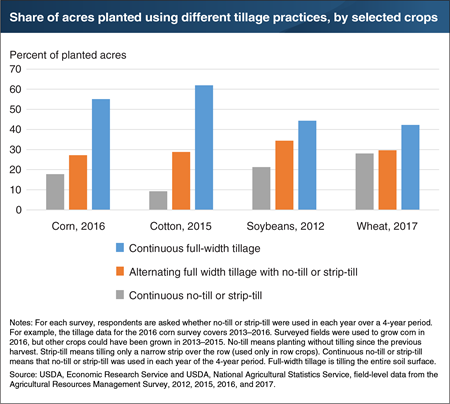 Tillage—the mechanical manipulation of the soil—helps to prepare the soil for planting, control weeds, incorporate surface-applied manure or fertilizer, and encourage soil warming for early planting. In recent decades, some farmers have eliminated the use of tillage altogether using “no-till” methods, or limited tillage to narrow strips where row-crops will be planted using “strip-till” methods. No-till and strip-till minimize soil disturbance and keep crop residue on the soil surface to reduce erosion and conserve soil moisture. Recent ERS research shows that many farmers who use no-till or strip-till often alternate these practices with full-width tillage (tilling the entire soil surface). On land where corn was planted in 2016, for example, no-till or strip till was used continuously during 2013–2016 on 18 percent, no-till or strip-till was used alternately with full width tillage on 27 percent, and full-width tillage was used continuously on 55 percent. The exact mix of tillage practices varied across the surveys. One reason farmers alternate tillage practices is because of crop rotation. For example, corn and soybeans are often grown in rotation, but farmers used no-till or strip-till more often for soybeans (about 34 percent in 2012) than for corn (27 percent in 2016). In many cases, farmers use no-till when growing soybeans, but use full-width tillage when growing corn. This chart appears in the ERS report, Tillage Intensity and Conservation Cropping in the United States, released September 2018.