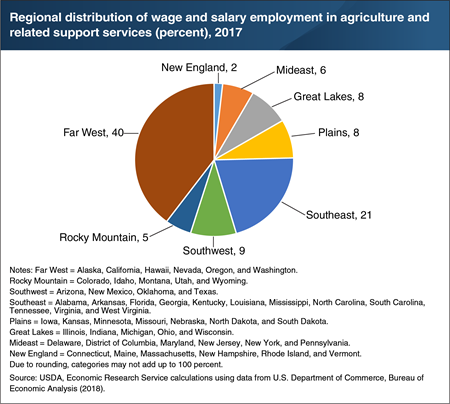 Every region of the United States produces agricultural goods and employs farm workers for a variety of essential tasks. However, despite the ubiquity of agricultural production throughout the Nation, wage and salary employment in agriculture and related support services has been most concentrated in two parts of the United States: the Far West and the Southeast. From the late 1990s to 2006–08, reflecting changes in the total number of farmworkers at the national level, the Far West’s share dropped from 40 percent to 35 percent, and the Southeast’s share declined from 22 percent to 20 percent. By 2017, the Far West’s share had risen again to 40 percent, while the Southeast’s rebounded slightly to 21 percent. Between 2009 and 2017, farm labor employment grew from roughly 465,000 workers to 536,000 workers in the Far West and from 255,000 to 281,000 in the Southeast. The Far West and Southeast are leaders in farm labor employment partly due to the commodities they produce, including vegetable and melon farming, fruit and tree nut farming, and greenhouse, nursery, and floriculture production—commodities for which labor’s share of total operating expenses is highest. Conversely, oilseed and grain farming (typical in the Mideast, Great Lakes, and Plains) are among the least labor intensive in terms of share of operating expenses. This chart appears in the ERS report, Farm Labor Markets in the United States and Mexico Pose Challenges for U.S. Agriculture released in November 2018.