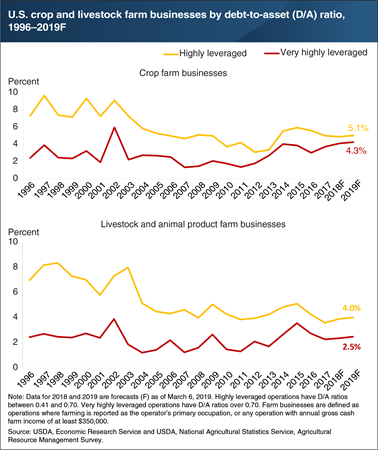 Farm businesses—operations where farming is reported as the operator’s primary occupation or that have at least $350,000 in annual sales—accounted for more than 94 percent of U.S. farm sector production in 2017. That year, farm businesses held 90 percent of all farm assets and 96 percent of farm debt. Debt-to-asset (D/A) ratios measure the amount of assets that are financed by debt, and can indicate a farm’s risk exposure and ability to overcome adverse financial events. The share of farm businesses that are highly leveraged (D/A ratio between 0.41 and 0.70) has fallen since 2015, but is forecast to increase slightly in 2018 and 2019. Farm businesses specializing in crops tend to have higher shares of both highly and very highly leveraged operations (D/A ratio over 0.70) than farm businesses specializing in livestock and animal products. In 2019, ERS forecasts 4.3 percent of crop farm businesses to be very highly leveraged, the highest share since 2002. Lending institutions consider D/A ratios (along with other measures reflecting the likelihood of default) when evaluating the credit worthiness of farms, so some of these highly and very highly leveraged farm businesses may have difficulty securing a loan. This chart updates data from the April 2014 ERS report, Debt Use by U.S. Farm Businesses, 1992–2011.