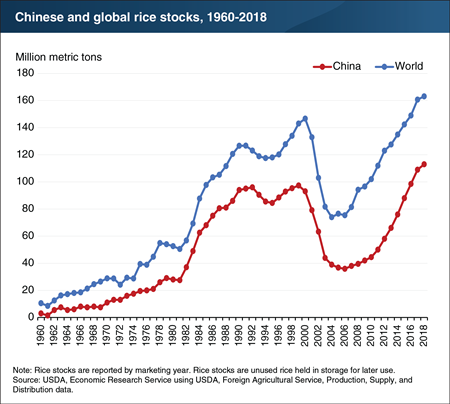 Rice stocks in China continue to climb, with 2018/19 marketing year ending stocks (unused rice kept in storage) projected at a record 113 million tons, or about 70 percent of the world’s stocks. By comparison, the United States is projected to hold 1.5 million tons of rice stocks. This is the 12th consecutive year of increasing stocks in China, the world’s largest rice producer and consumer. Rising commodity stocks typically indicate overproduction or reduced demand. Growing stocks can also reflect a variety of government policies. Governments may hold stocks as assurance against emergencies (such as food shortages and crop failures) or tight global supplies that could lead to global price spikes, or they may purchase large quantities of a commodity and hold it in storage to increase prices received by farmers. In general, government purchases insulate rice prices and provide price and demand stability. In line with China’s increased focus on agriculture and self-sufficiency, the Government raised rice support prices annually from 2008 to 2015, which resulted in overproduction. A version of this chart appears in the December 2018 ERS report, Rice in Asia’s Feed Markets.