One-third of U.S. farm output is produced under contract, but the share differs by commodity 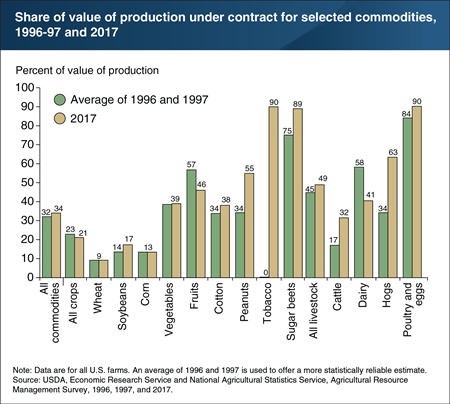 Farmers use contracts to manage price and production risks and ensure a market for their products. Processors, integrators, and buyers use contracts to procure farm products with specific qualities and reduce supply uncertainty. The share of value of production that was under contract across all commodities in 2017 was 34 percent, close to the share in 1996/1997 (32 percent). More than 50 percent of U.S. peanuts, tobacco, sugar beets, hogs, and poultry/eggs in 2017 were produced under contract. In contrast, less than 20 percent of wheat, soybeans, and corn were grown under contract. The share of tobacco production under contract jumped from less than 1 percent in 1996/1997 to 90 percent in 2017, as cigarette manufacturers switched from cash auctions to contracts to ensure a sufficient supply of specific types of tobacco. The share of hogs produced under contract nearly doubled, from 34 percent in 1996/97 to 63 percent in 2017. Hog processors can use contracts to better control the characteristics of the hogs they acquire, helping them offer more consistent quality of meat to consumers. The decline in dairy reported under contract may reflect changing perceptions of farmers about their transactions with dairy cooperatives; more research is required to clarify that dynamic. This chart appears in the ERS report America’s Diverse Family Farms: 2018 Edition, released December 2018.