Farm wages are rising, both in inflation-adjusted terms and in relation to nonfarm wages 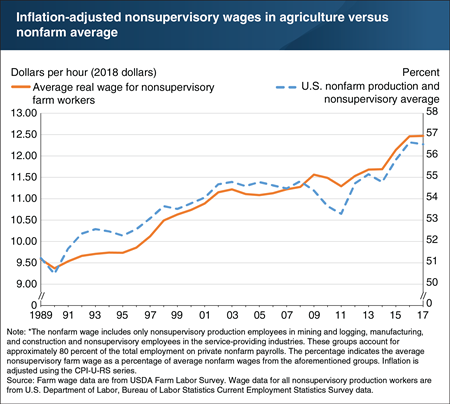 In recent years, farmers have reported rising labor shortages. These anecdotal reports are supported by USDA data, which show average wages for nonsupervisory farm laborers rose more quickly since 2014 than previously. Economists consider inflation-adjusted wage growth to strongly indicate labor shortages in a given industry. From 2014 to 2017, the farm wage grew faster than the nonfarm wage, rising from 55 percent to 57 of the nonfarm wage. Between 2014 and 2017, the average hourly wage for nonsupervisory hired farmworkers rose from $11.69 to $12.47, an increase of 7 percent. In contrast, over the same period, the rise in hourly wage for all nonsupervisory production workers outside of agriculture rose from $21.34 to $22.05, an increase of just over 3 percent. Inflation-adjusted wage growth slowed in 2017 because of lower rates of nominal (non-adjusted) wage growth and an uptick in inflation—a trend that has continued into 2018. As of April 2018, nonsupervisory farm wages averaged $12.74 per hour in nominal terms, an increase of 3 percent over April 2017. This chart appears in the ERS report, “Farm Labor Markets in the United States and Mexico Pose Challenges for U.S. Agriculture,” released in November 2018.