No-till adoption slows for some crops 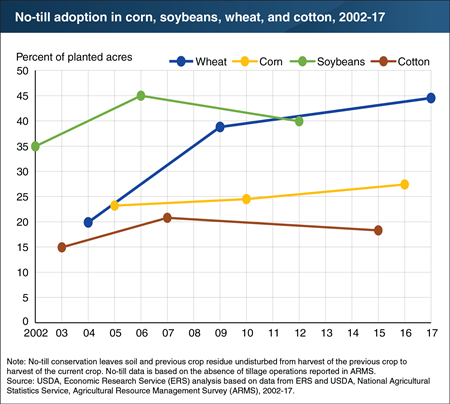 Conservation tillage reduces soil disturbance and keeps soil covered, thereby conserving soil moisture and lessening erosion. When used in conjunction with other practices, it can also help promote soil health. No-till, a type of conservation tillage where farmers plant directly into remaining crop residue without tilling, accounted for the majority of conservation tillage acreage for wheat (45 percent of total acres) in 2017 and soybeans (40 percent of total acres) in 2012. ERS researchers found that adoption of no-till, in general, increased from 2000 to 2007—particularly for wheat (2004-2009) and soybeans (2002-2006). In later periods, no-till adoption increased more slowly for wheat (2009-2017) and may have declined for soybeans (2006-2012) and cotton (2007-2015). Data for corn indicate only modest gains in adoption of no-till between 2005 and 2016. This chart appears in the ERS report, Tillage Intensity and Conservation Cropping in the United States, released in September 2018.