U.S. and Mexican avocado production is concentrated in a small number of States 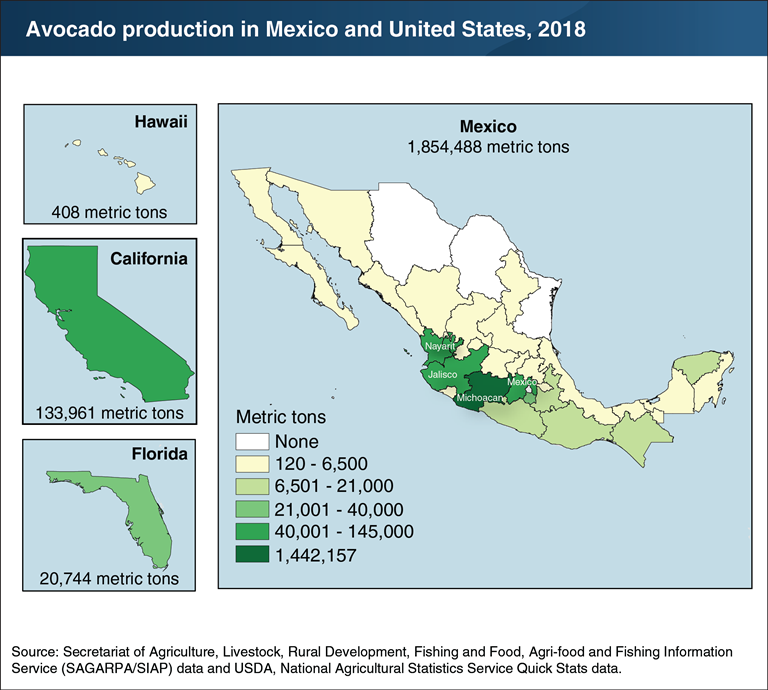 From 2015 to 2017, California and Florida accounted for 86 percent and 13 percent of U.S. avocado production, respectively, while the west-central Mexican States of Michoacán and Jalisco accounted for 78 percent and 8 percent, respectively, of Mexican production. A USDA phytosanitary workplan implemented between 1993 and 2007 allowed Hass avocados from certain municipalities in Michoacán to enter increasingly larger portions of the United States, making Michoacán the leading supplier of fresh avocados to the U.S. market. From 2015 to 2017, growers and shippers in Michoacán supplied about 72 percent of total deliveries (imports and domestic production) of fresh avocados in the United States; California supplied about 13 percent. In 2016, the United States implemented a new phytosanitary workplan that allows fresh avocados to be imported from any Mexican State subject to a “systems” approach. That is, farm-specific risk management measures are applied, which together achieve the desired level of phytosanitary protection. Growers in Jalisco are working to meet the requirements of this new workplan in the hope of joining their counterparts in Michoacán in exporting fresh avocados to the United States. This chart is drawn from data discussed in the ERS Fruit and Tree Nuts Outlook newsletter released in March 2018.