Global food security improvements are projected to be largest in Asia, but all regions are expected to progress 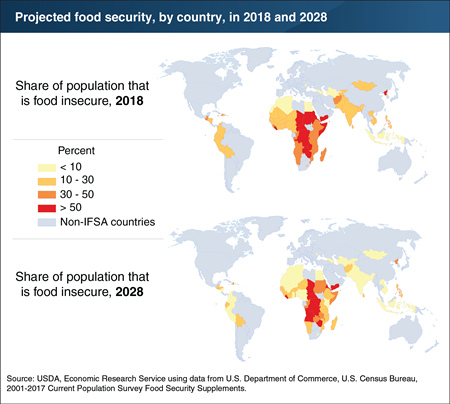 ERS’s annual International Food Security Assessment (IFSA) estimates and projects levels of food insecurity at a national level for 76 low- and middle-income countries. Using a demand-oriented model, ERS projects per capita food consumption based on prices and income and evaluates it against a daily caloric target of 2,100 calories per person per day, a level necessary to sustain a moderately active adult. In 2018, 21 percent of the population in the 76 studied countries is estimated to be food insecure. This means that about 782 million people—out of a population of 3.7 billion in the studied countries—consume less than 2,100 calories a day. By 2028, based on projected income growth and sustained low food prices, the share and the number of food-insecure people in these countries are expected to decline to 10 percent and 446 million, respectively. Projected income growth is positive in almost all countries included in the analysis, although growth rates are lower than in the early 2000s. The biggest improvements are projected for Asia, where strong economic growth, particularly in India and Southeast Asia, combined with slowing population growth, contribute to increasing per capita incomes and expected improved food security by 2028. This chart appears in “International Food Security Expected To Improve, But Regional Differences Persist” in ERS’s November 2018 Amber Waves magazine.