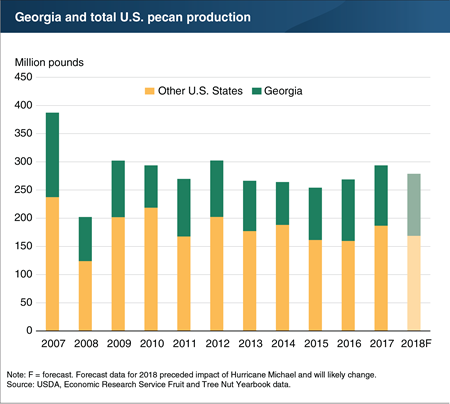 Although Hurricane Michael weakened to a Category 3 storm as it swept through southwest and central Georgia, the heavy rains and powerful winds have caused uncertainty about the State’s pecan crop in 2018. Some farmers reported large amounts of pecans blown from trees and many trees blown over, while other producers reported limb and debris cleanup that will be costly and delay the harvest. Producing the most pecans of any U.S. State, Georgia accounts for over one-third of total production. Before the hurricane, USDA forecast that Georgia would produce 110 million pounds of the national projected total of 289 million pounds of pecans in 2018. Although hard data are not yet available on the hurricane’s impact on Georgia’s pecan crop, the 2018 harvest will likely produce less than expected. Despite Georgia’s expected losses, the State’s total is unlikely to fall below the 85-million-pound projected total of New Mexico (the second-largest pecan-producing State) for 2018. This chart is drawn from data discussed in the ERS Fruit and Tree Nut Outlook newsletter, released in September 2018.