Inflation-adjusted food spending by U.S. households fell during the Great Recession and did not recover until 2015 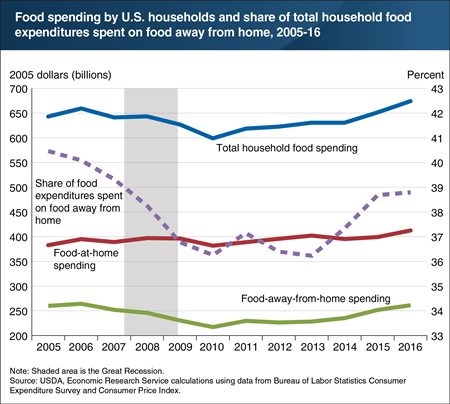 The Great Recession, which officially ran from December 2007 to June 2009, was the most severe economic downturn since the Great Depression. Using data from the Bureau of Labor Statistics’ Consumer Expenditure Survey, ERS researchers examined household food spending from 2005 to 2016 using inflation-adjusted dollars to make the expenditures comparable across years. They found that total food spending declined by 7 percent from 2007 to 2010 and did not return to pre-recession levels until 2015. During this period, however, households adjusted their spending on food at grocery stores and other retailers (food at home) differently from spending at restaurants, fast-food places, and other food-away-from-home establishments. In every year except 2010, food-at-home spending exceeded 2005 levels. In contrast, spending at food-away-from-home establishments declined by 18 percent from 2006 to 2010 and did not recover to its 2005 level until 2016. Thus, the share of total household food expenditures spent on food away from home declined from 40.5 percent in 2005 to 36.3 percent in 2010, before rising to 38.8 percent in 2016. This chart appears in “Food Spending of Middle-Income Households Hardest Hit by the Great Recession” from ERS’s Amber Waves magazine, September 2018.