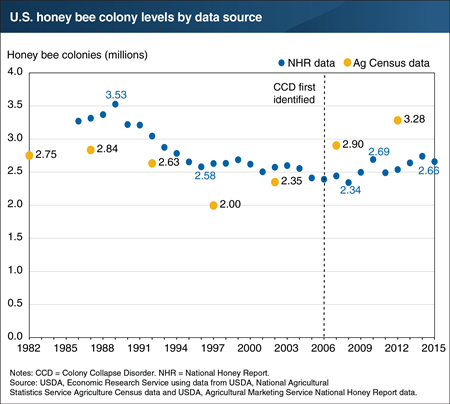 In 2006, large and mysterious losses of honey bee colonies led entomologists to classify a set of diagnostic symptoms as Colony Collapse Disorder (CCD) and spurred major efforts to measure, quantify, and understand pollinator loss. New data show that, between 2007 and 2013, winter colony loss rates in the United States averaged 30 percent, which is approximately double the loss rate of 15 percent previously thought to be normal. Elevated winter colony losses, however, have not resulted in enduring declines in colony numbers. Instead, the number of U.S. honey bee colonies is either stable or growing depending on the dataset being considered. At the State level, loss rates are uncorrelated with year-to-year changes in the number of colonies, suggesting that beekeepers are able to replace lost colonies within the course of a calendar year. In other terms, the data indicate that beekeepers are adding colonies at similar or higher rates than they are losing them to CCD or other causes. This chart appears in the October 2018 ERS Amber Waves article, “Despite Elevated Loss Rate Since 2006, U.S. Honey Bee Colony Numbers Are Stable or Growing.”