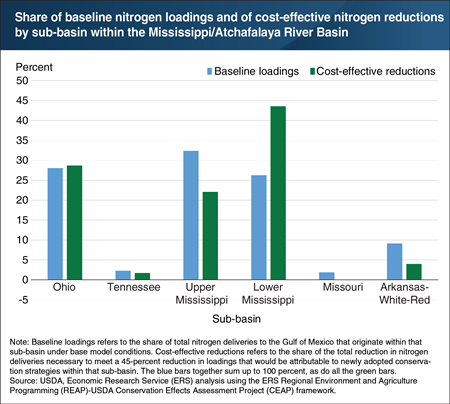 Every summer, a large area forms in the Gulf of Mexico where dissolved oxygen is too low for many aquatic species to survive. This “hypoxic zone” is fueled by nutrient (nitrogen and phosphorus) runoff from the Mississippi/Atchafalaya River Basin (MARB), a region containing about 70 percent of U.S. cropland. Recent ERS research estimated that the least-cost strategy for reducing nutrient deliveries to the Gulf from cropland in the MARB would focus a large share of the nutrient-reducing practices and cropping changes in the Lower Mississippi sub-basin. Almost half of nitrogen (44 percent) and phosphorus (46 percent) reductions under the least-cost scenario would come from the Lower Mississippi. Although the baseline analysis estimates that agriculture in the Upper Mississippi sub-basin delivers the most nitrogen to the Gulf relative to other sub-basins (over 32 percent), the Lower Mississippi sub-basin’s proximity to the Gulf means that a higher percentage of nutrient losses there reaches the Gulf than from fields farther upstream. The Lower Mississippi was estimated to have relatively high per-acre nutrient losses and deliveries to the Gulf, as well as the lowest per-pound costs of reducing nitrogen deliveries for almost all conservation practices analyzed. This chart appears in the ERS report Reducing Nutrient Losses From Cropland in the Mississippi/Atchafalaya River Basin: Cost Efficiency and Regional Distribution, released September 2018.