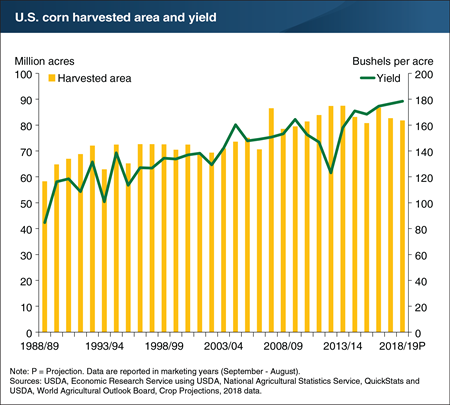 The United States is on track for another record-setting year of corn yields. USDA’s first survey-based yield forecast of the 2018/19 corn crop reported a yield gain of 4.4 bushels per acre to a record 178.4 bushels. This eclipses the record set during the 2017/18 marketing year (September-August). Over the long term, corn yields trended upward with limited interruption until 2010/11 when a severe drought impacted much of the Southern and Central United States. The drought continued through 2012/13 when yields reached their lowest point since 1995/96 at 123.1 bushels per acre. Since then, yields per acre have recovered significantly and are now on track for three consecutive record years. While per acre yields have reached new heights, the number of acres of corn harvested has declined slightly over the same period. As a result, total U.S. corn production in 2018/19 is projected to be just the third highest on record. This chart appears in the latest ERS Feed Outlook newsletter, released in August 2018.