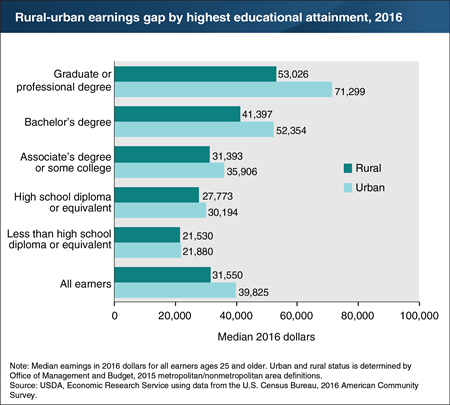 The most recent data from the U.S. Census Bureau’s 2016 American Community Survey show that workers with higher levels of education had higher median earnings, both in rural and urban areas. For example, median earnings for rural working adults with a high school diploma were $27,773 in 2016, which was $6,243 more than the median for rural working adults without a high school diploma or equivalent. Urban workers without a high school diploma earned about the same as their rural counterparts. However, at every higher level of educational attainment, the typical urban worker earned increasingly more than the typical rural worker with the same education. This rural-urban earnings gap was lowest ($350) for workers with less than a high school diploma or equivalent and largest ($18,273) for those with graduate or professional degrees. Educational attainment is only one of many potential characteristics that determine the wages that workers earn. Other characteristics not shown in the chart—such as work experience, job tenure, and ability—may also contribute to earnings. This chart appears on the ERS topic page for Rural Education, updated August 2018.