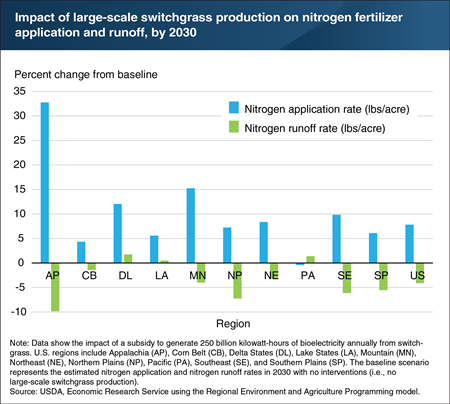 Native grasses, including switchgrass, have extensive root networks that reach deep into the soil—increasing water filtration, nutrient holding capacity, and erosion control. Switchgrass also offers a potential renewable source for liquid fuels or bioelectricity, but is not currently widely grown. An ERS study simulated the effects on agricultural land use and on the environment of growing enough switchgrass to generate 250 billion kilowatt-hours of electricity annually—approximately the amount generated by U.S. hydropower today. Switchgrass is expected to be grown in regions that have high switchgrass yields, but relatively low yields of food crops or hay. The Northern Plains (NP) and Appalachia (AP) would provide two-thirds of total land planted in switchgrass. As switchgrass acreage increases and displaces non-energy crops, nitrogen fertilizer applied per acre of non-energy crop increases. All regions would experience increased nitrogen application per cropland acre, except the Pacific region (PA), which shows a small decrease. However, the overall effect of planting more switchgrass would be to retain more nitrogen nutrient and reduce nitrogen runoff into water bodies. The amount of nitrogen lost to water is expected to decline compared with the baseline scenario by about 4 percent nationally, with declines experienced in 7 of 10 regions. This chart is derived from the January 2017 ERS report, Dedicated Energy Crops and Competition for Agricultural Land.