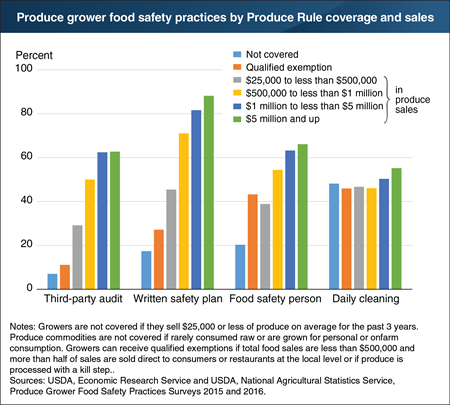 The Produce Rule (PR) of the Food Safety Modernization Act (FSMA) requires specific disease-preventive practices be used by U.S. growers of produce that is consumed raw. Finalized in 2015, the rule began to take effect this year. An ERS survey covering 2015 through 2016 found that a significant share of growers who would be covered by the PR upon implementation had already established key food safety practices such as hiring a dedicated food safety person or reviewing current practices through an outside, or third-party, food safety auditor. The PR does not require third-party food safety audits or written food safety plans, but these activities help serve as an indicator for PR readiness. Growers who were not covered by the PR or had a qualifying exemption had the lowest shares with third-party audits, and those groups responded similarly when asked if they kept a written food safety plan. For growers covered by the PR, responses were correlated with annual produce sales levels. Those selling over $5 million per year had the largest share already using each food safety practice, including employing a food safety person and conducting daily cleaning. This chart appears in “Before Implementation of the Food Safety Modernization Act’s Produce Rule: A Survey of U.S. Produce Growers,” released in August 2018.