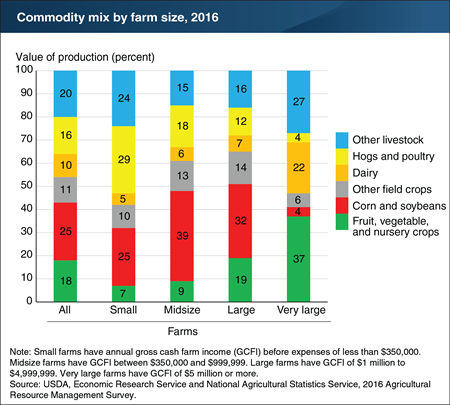 Commodity mixes differ by farm size. For example, hogs and poultry accounted for 29 percent of the production of small farms in 2016, a much greater share than in other size classes. Small farms typically raise the animals for processors under contracts, which reduces price risks and allows them access to bank financing. Dairy production and fruit, vegetable, and nursery crops—where economies of scale give an advantage to larger farms—accounted for 59 percent of the output of very large farms, compared to 12 percent of the output of small farms. Midsize farms emphasize corn and soybean production, as well as other field crops. This chart updates data found in the March 2018 ERS report, Three Decades of Consolidation in U.S. Agriculture.