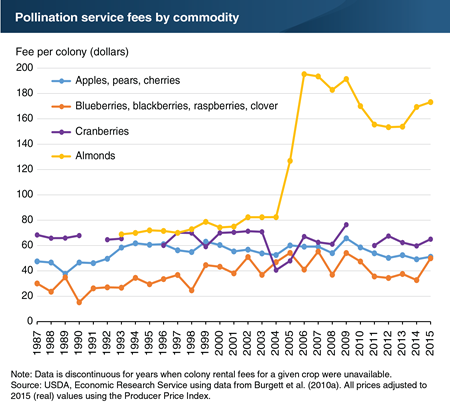 As late as 1988, pollination services accounted for only 11 percent of beekeeper revenue, with the majority of revenue coming from honey sales. In 2016, that share had risen to 41 percent, slightly surpassing revenue from honey sales. The relatively recent increase in pollination service revenue mainly stems from the dramatic growth in acreage for almonds. Compared with other crops, almonds require more honey bee colonies per acre for pollination and suffer greater yield losses without insect pollination. Beekeeper surveys in California and the Pacific Northwest indicate that, until 2004, almond pollination fees were only slightly higher than fees for other crops. From 2004 to 2006, however, almond pollination service fees more than doubled and, after receding slightly, remained high through 2016. Recent data show almond farmers paid $165 per colony rented in 2016, roughly triple the average of $55 for other crops. This chart appears in the July 2018 Amber Waves Finding, “Driven by Almonds, Pollination Services Now Exceed Honey as a Source of Beekeeper Revenue.”