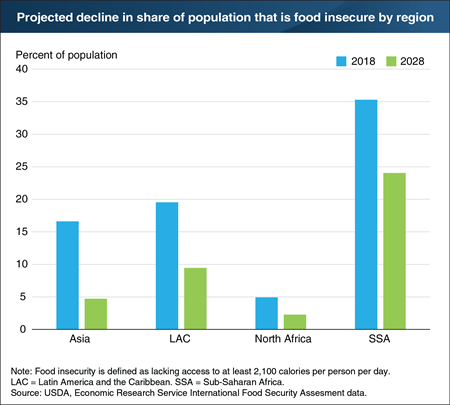 ERS’s annual International Food Security Assessment analyzes food security conditions in 76 low- and middle-income countries. The assessment projects per capita food consumption based on prices and income levels and evaluates it against a caloric target of 2,100 calories per person per day, a level necessary to sustain life at a moderate level of activity. Across all countries studied, the share of the population that is food insecure will fall from an estimated 21.1 percent in 2018 to 10.4 by 2028, and the number of food-insecure people will fall from an estimated 782 million to 446 million. While all regions are expected to see improvements in food security, Sub-Saharan Africa is expected to continue to struggle with significant food insecurity. Over the decade, the share of Sub-Saharan Africa’s population that is food insecure is expected to fall from 35 percent to 24 percent. While the change is significant, food insecurity would be more than double that of any other region by 2028. Conversely, Asia and Latin America and the Caribbean are both expected to fall below double digits by 2028. This chart appears in the July 2018 ERS report, International Food Security Assessment, 2018-2028.