Livestock production has shifted to more specialized farms over time 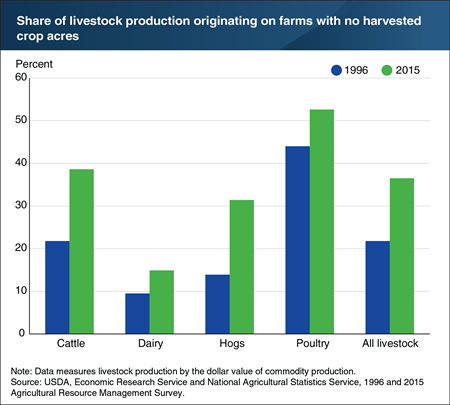 Livestock production has become increasingly specialized, relying less on homegrown and more on purchased feed. Since fully specialized farms have no cropland to absorb manure as fertilizer, they must move their manure off the farm. In 2015, 37 percent of all livestock were produced on farms that had no crop production, up from 22 percent in 1996. Specialization grew in each major livestock commodity during this period. In 2015, nearly 53 of all poultry production occurred on farms that raised no crops, up from 44 percent in 1996. Poultry manure is lighter than other manure and easier to transport, making it cheaper for a contract poultry operation to dispose of all its manure off the farm and reducing the incentive to grow crops on farm. Specialization increased substantially in hog production, where 31 percent of production occurred on farms with no crops in 2015, up from 14 percent in 1996. This chart appears in the March 2018 ERS report, Three Decades of Consolidation in U.S. Agriculture.