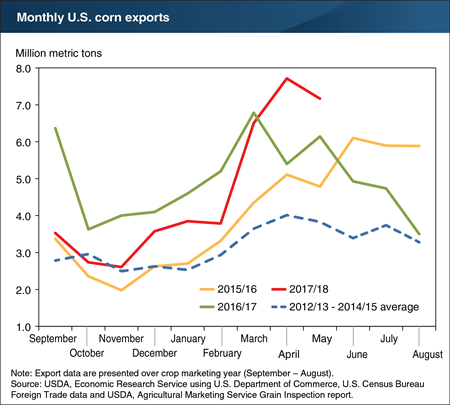 U.S. corn exports reached an all-time high in April at 7.7 million metric tons. Year-to-date corn shipments through May are estimated at 29 million metric tons, and USDA projections for exports in the 2017/18 crop marketing year (September-August) were raised to 58.4 million metric tons. The previous monthly record for exports was set in November 1989, nearly 30 years ago. Projections for May exports, based on export inspections, are higher than usual at this time of year, suggesting continued strength in the U.S. corn export market. This is due, in part, to continued drought in Argentina, a major corn supplier, reducing export prospects there. Additionally, Brazil is expected to have a poor crop, reflecting dry weather and less area planted for the second cropping season. As a result, importing countries have fewer options for sourcing corn, increasing U.S. competitiveness. A version of this chart appears in ERS’s Feed Outlook: June 2018 newsletter.