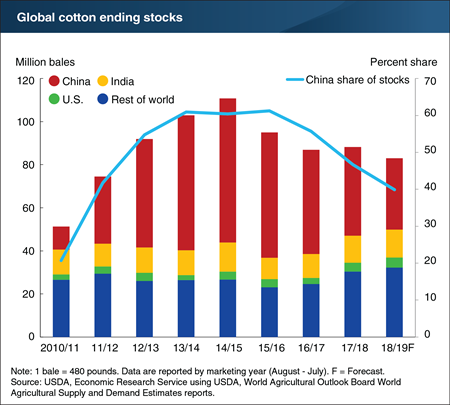 The latest USDA cotton projections for 2018/19 indicate that global cotton stocks will decrease, following last season’s relatively small increase. Worldwide, USDA projects ending stocks at 83.0 million bales for the 2018/19 marketing year, nearly 6 percent below 2017/18 and the lowest since 2011/12. Global cotton stocks totaled a record 110.8 million bales at the end of 2014/15. China held 60 percent of the total, reflecting Government policies at the time that led to unusually large stocks in its national reserve. Subsequently, China implemented policies to reduce its surplus stocks and thereby lowered world stocks. For 2018/19, stocks in China are projected to decline further to 33.1 million bales—40 percent of the global total—while stocks outside China are forecast to approach a record high 50 million bales. However, as a share of world mill use, stocks outside China are expected to rise only slightly in 2018/19. In the United States, stocks have risen progressively and are on track to be their highest in a decade at 4.7 million bales. This chart appears in the ERS Cotton and Wool Outlook: June 2018.