Livestock and poultry weights per animal have increased steadily since 2000 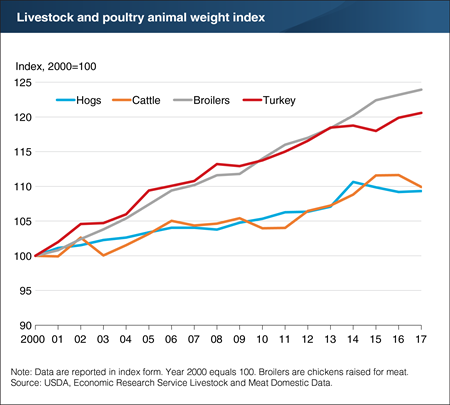 Regardless of species, livestock and poultry animals are being slaughtered at heavier weights than in the past. Aside from the availability of relatively cheap feed ingredients (corn/soy) since 2014, improved feed efficiency has contributed to faster growth and higher animal weights. The long-term trend marked by sustained growth in dressed (butchered) weights and live weights is due, in large part, to changes in animal genetics through selective breeding and the implementation of modern and improved production systems. As a result, on average, larger animals are being slaughtered in the United States. On a dressed-weight basis, cattle have increased 73 pounds on average since 2000, a gain of 10 percent. At the same time, hogs have increased 18 pounds, or 9 percent. Poultry has also become larger since 2000. On a live-weight basis, turkeys are 5.3 pounds (20.5 percent) larger on average, while broilers are 1.2 pounds (23.9 percent) larger. This chart is adapted from a chart appearing in the June ERS Amber Waves data feature, “Per Capita Red Meat and Poultry Disappearance: Insights into Its Steady Growth.”