All-wheat food use is growing, lifts per capita utilization 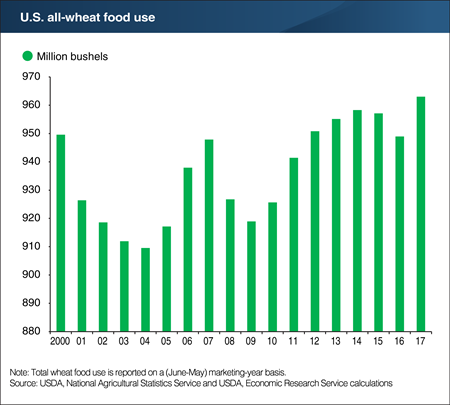 U.S. all-wheat food use for the 2017/18 marketing year is now estimated at 963 million bushels, up 14 million from 2016/17. The strong rise in wheat food use reverses a multiyear trend of both declining per capita and aggregate wheat food use. For 2017, per capita wheat food use is projected at 131.8 pounds, up slightly from 131.7 pounds per capita in 2016. U.S. Bureau of Economic Analysis data indicate that real personal consumption expenditures, driven by rising incomes, have steadily increased and support growth in food service and accommodations expenditures. Wheat food use tends to increase as expenditures on food eaten away from home rise. Accordingly, the recent lift in wheat food use can, in part, be explained by increased demand for food services such as meals eaten at fast casual restaurants. The restaurant industry is projecting sustained, moderate growth through 2018, which in turn supports an upward revision of the 2017/18 wheat food use estimate to 963 million bushels. This chart is from the ERS Wheat Outlook: May 2018.