U.S. production of most major meat and animal products is expected to increase in 2019 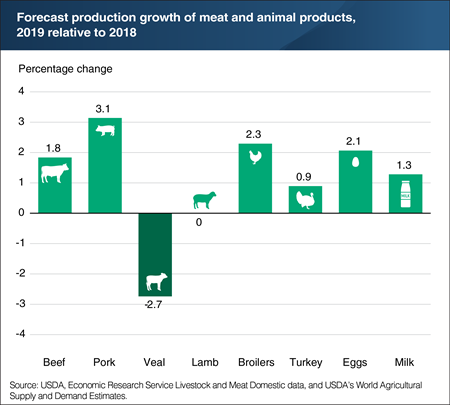 USDA’s newly released commodity forecasts for 2019 indicate expected growth in U.S. production of beef, pork, broilers (young chickens), turkey, eggs, and milk. Generally, production growth in meat and animal products is supported by relatively low feed costs, the long term trend of increasing animal weights for meat, and higher yields per animal for milk and eggs. However, veal production is expected to decrease, while no growth is expected for lamb. In 2019, growth of beef and turkey production is projected to exceed the respective 2014–18 averages of 1.2 percent and 0.4 percent. Growth of pork, broilers, and egg production is expected to be relatively consistent with the respective 2014–18 average growth rates of 3 percent, 2.3 percent, and 1.9 percent. The forecast growth rate for milk production is down compared to the 2014–18 average of 1.7 percent. In 2014–18, veal production contracted sizably, averaging annual decreases of 7.9 percent, but contraction has slowed in 2014–18. Similarly, in 2019, lamb, which saw average annual declines of 1.3 percent in 2014–18, is expected to maintain production levels consistent with 2018. This chart appears in the ERS Livestock, Dairy, and Poultry Outlook released in May 2018.