Agriculture and its related industries added over $1 trillion to U.S. GDP in 2016 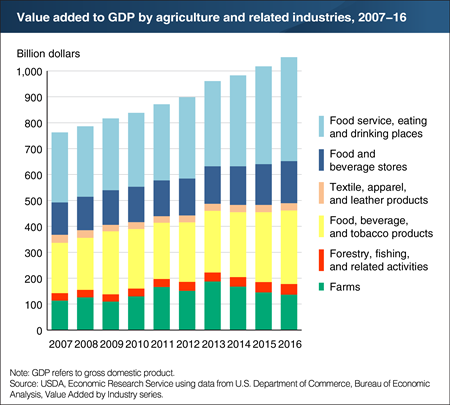 Agriculture, food, and related industries contributed 1.05 trillion to U.S. gross domestic product (GDP) in 2016, a 5.7-percent share. The output of America’s farms contributed $136.7 billion of this sum—about 1 percent of GDP. The overall contribution of the agriculture sector to GDP is larger than this because sectors related to agriculture—forestry, fishing, and related activities; food, beverages, and tobacco products; textiles, apparel, and leather products; food and beverage stores; and food service, eating and drinking places—rely on agricultural inputs in order to contribute added value to the economy. The value added by America’s farms has decreased in each of the last 3 years, from a high of $187.0 billion in 2013. The decline in value added is primarily driven by lower commodity prices for major crops like corn and soy, which were near record highs in 2013. All other agriculture related industries included grew in 2016 relative to a year earlier. The largest growth occurred in the food service, eating and drinking places industries, with 6 percent more value added in 2016 than in the previous year. This chart is updated for 2016 and is from ERS's data product, Ag and Food Statistics: Charting the Essentials.