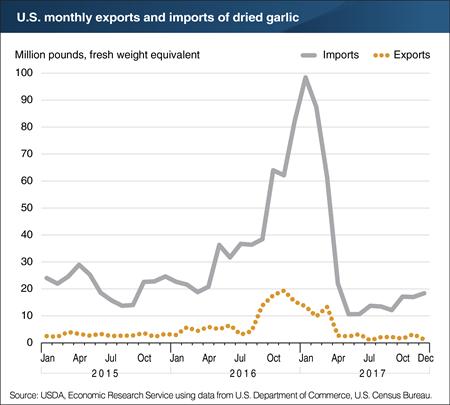 In late 2016 to early 2017, the amount of dried garlic imported to and exported from the United States rose above historical levels. The spike in U.S. garlic trade was precipitated by events in China, the world’s largest producer of garlic. Relatively low supply and high fresh garlic prices in 2016 incentivized Chinese farmers to increase production in 2017, ultimately leading to excess supply and a decline in global fresh garlic prices. This oversupply also impacted the market for dried garlic, viewed as a high value-added outlet for fresh garlic, and international prices for dried garlic fell as well. U.S. imports began to climb around May 2016 and peaked in January 2017 at approximately 98 million pounds. Before and during this period, China accounted for over 95 percent of all dried garlic imported into the United States. U.S. exports of dried garlic also rose during this period. Much of the growth in U.S. dried garlic shipments was to markets such as Peru, India, Portugal, and Greece, where U.S. exports were previously limited due to typically high competition from China. As global prices rose back to normal levels by mid-2017, U.S. dried garlic trade returned to historical levels. This chart appears in the ERS Vegetables and Pulses Outlook newsletter released in April 2018.