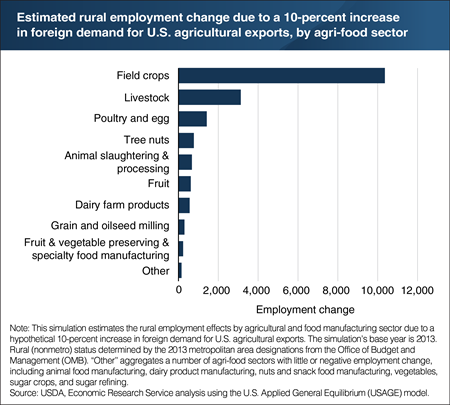 ERS estimates that U.S. agricultural exports, totaling about $135 billion in 2016, supported about 1.1 million full-time, civilian jobs. Using a model of the U.S. economy with a base year of 2013, ERS researchers found that a hypothetical 10-percent increase in foreign demand for U.S. agricultural exports would add about 41,500 jobs, or about a 0.03-percent increase in total U.S. employment. About 42 percent would be in rural areas—where employment in agriculture and food manufacturing would increase by about 18,200 jobs, while employment in other sectors would decrease by nearly 700 jobs as some labor shifts into agriculture. The net effect on employment was positive for 17 of the 20 agri-food sectors in the analysis, with the largest increases in field crops, livestock, and poultry and egg. This reflects the large initial shares of exports and employment in these sectors, relative to other agri-food sectors. Field crops alone accounted for nearly 57 percent of the increase in agri-food rural employment. This chart is based on data that appears in the April 2017 ERS report The Potential Effects of Increased Demand for U.S. Agricultural Exports on Metro and Nonmetro Employment.