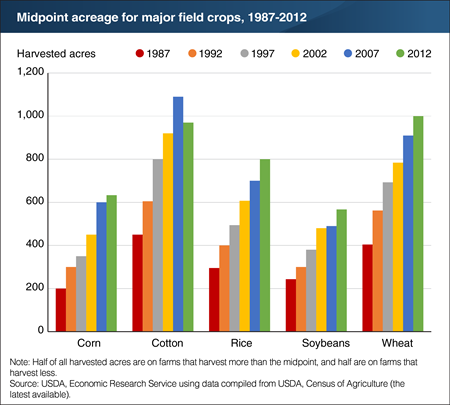 Over the last three decades, the midpoint acreage—where half of acres are on farms that harvest more than the midpoint, and half are on farms that harvest less—has shifted to larger farms for almost all crops. In 1987, for example, the midpoint for corn was 200 acres, which increased to 600 acres by 2012. Four other major field crops (cotton, rice, soybeans, and wheat) showed a very similar pattern: the midpoint for harvested acreage more than doubled for each crop between 1987 and 2012. The midpoints also increased persistently in each census year, with the single exception of a decline in cotton in 2012. ERS researchers repeated the analysis for a total of 55 crops in all. Consolidation was nearly ubiquitous, as the midpoint increased in 53 of 55 major field and specialty crops between 1987 and 2012. Consolidation was also substantial, as most of these midpoint increases were well over 100 percent—and it was persistent, as most midpoints increased in most census years. This chart appears in the ERS report Three Decades of Consolidation in U.S. Agriculture, released March 2018.