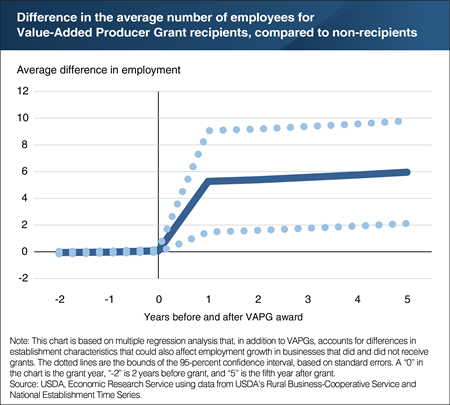 USDA’s Value-Added Producer Grant (VAPG) program provides grants intended to help farmers and ranchers add greater value to agricultural commodities, such as through additional processing or marketing of new products. For example, producers could adopt organic practices, turn berries into jam, or process meat into sausage. Between 2001 and 2015, the program provided a total of 2,345 grants to farmers and ranchers—totaling $318 million, or about $136,000 per grant on average. ERS researchers investigated the effect of the VAPG program on job creation by comparing employment trends pre- and post-grant for VAPG recipients and similar non-recipients. No significant difference in average employment levels was found between the two groups before the grants were received. However, average employment grew more rapidly for VAPG recipients than non-recipients after receipt of the VAPGs. The researchers found that grant recipients employed five to six more workers on average than non-recipients 1 to 5 years after the grant was received. However, given a 95-percent confidence interval, these job growth numbers can vary between about 2 to 10 jobs. At the time of the grants, these businesses employed around 14 employees on average. This chart appears in the May 2018 ERS report Impacts of USDA’s Value-Added Producer Grant Program and Its Effect on Business Survival and Growth.