World cotton stocks are projected to rise slightly in 2017/18 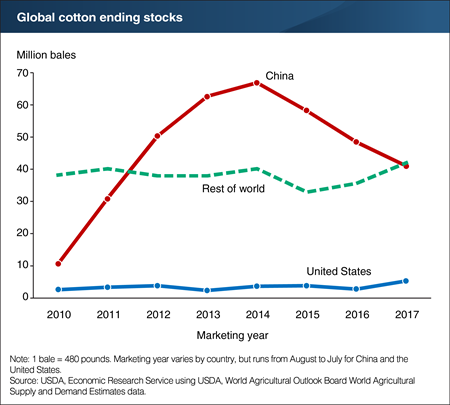 Global cotton ending stocks serve as an important benchmark and help determine worldwide cotton prices. Global cotton ending stocks are projected to increase slightly in the 2017/18 marketing year. Global ending stocks are forecast at over 88 million bales, about 2 percent above the previous season—but the second lowest since 2011/12. The rise in stocks follows back-to-back decreases over the last two marketing years. The largest holder of cotton stocks is China, which accounts for nearly 50 percent of the world total. China’s share has fluctuated in recent years, from 20 percent in 2010/11 to a high of 61 percent in 2014/15 and back down to 46 percent in the current season. Since 2014/15, China’s stocks have declined as policies to reduce the excess cotton supplies also discouraged production and limited imports. Meanwhile, stocks in the United States and for the rest of the world are projected to increase in 2017/18, largely due to increased production brought about by relative prices that favor cotton over competing crops such as corn and soybeans. This chart appears in the ERS Cotton and Wool Outlook newsletter released in April 2018.