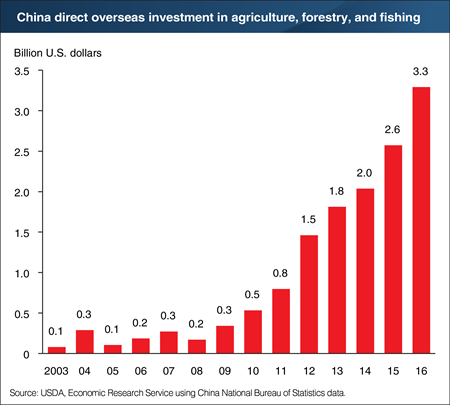 China's need for agricultural resources and technology and the country's sustained economic growth are driving rapid growth in Chinese investment in agriculture and food sectors abroad. According to Chinese investment statistics, overseas ventures in agriculture, forestry, and fisheries soared from $300 million in 2009 to $3.3 billion in 2016. But these totals understate the magnitude of Chinese agricultural-focused foreign assets because the statistics exclude the acquisition of food processing and trading companies classified in manufacturing and service sectors. An initial wave of investments during 2004-12 was focused mainly on crop production, fishing ventures, and acquiring raw materials for the Chinese market. More recently, some Chinese companies and officials have shifted the thrust of their strategy from farming overseas to acquiring established agribusiness companies based in Europe, North America, and Oceania such as ChemChina's acquisition of Syngenta and Shuanghui International's purchase of U.S.-based Smithfield Foods. This chart appears in the April 2018 Amber Waves feature, "China's Agricultural Investment Abroad Is Rising."