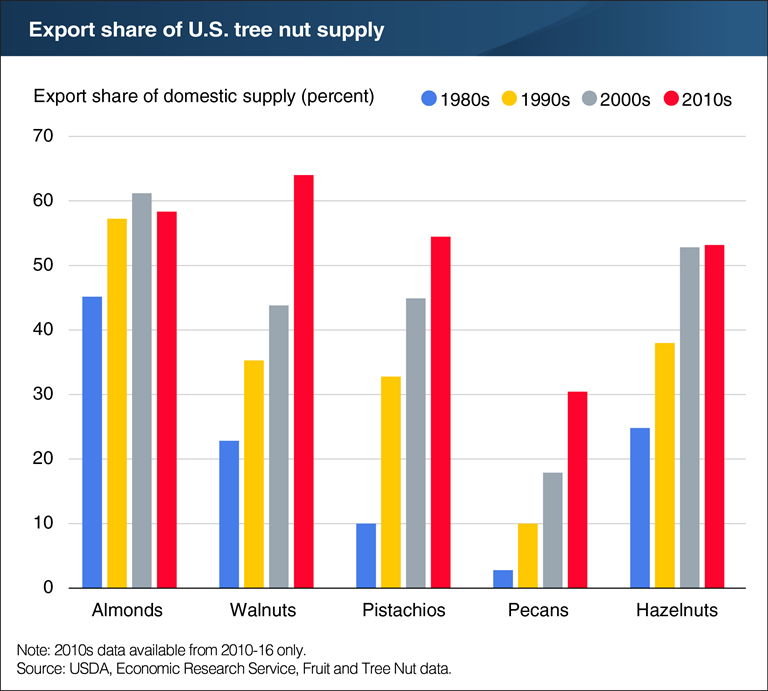 Unlike the fruit and vegetable sectors, the U.S. tree nut industry (as a whole) is a net exporter. While almonds, produced mainly in California, have been exported at high levels for decades, many other tree nuts have expanded the share of domestic supplies sold on the export market. U.S. almond, walnut, pistachio, and hazelnut production are dependent on exports for more than 50 percent of sales, for example. Expanding export demand has driven domestic grower prices higher, although record tree nut production in recent years has stabilized prices for most varieties. The largest markets for U.S. tree nuts include Hong Kong, India, Spain, but trade is widely dispersed across the European Union and Southeast and East Asia. Almonds represented 57 percent of all U.S. tree nut exports, by volume, in 2017. Although exports of tree nuts have grown at a faster rate, domestic use of tree nuts has expanded as well. Domestic use of tree nuts has doubled since 2000, while exports have tripled. This chart appears in the April ERS Amber Waves data feature, "Consumer Demand for Fresh Fruit Drives Increases Across Sector."