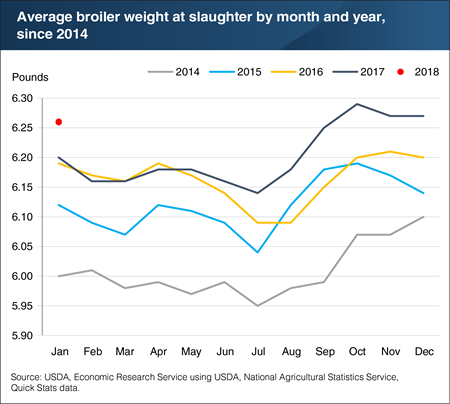 U.S. broiler meat production continues to grow, reaching 3.6 billion pounds in January 2018, almost 4 percent higher than the previous year. For the year, USDA expects broiler production to reach 42.6 billion pounds, almost 1 billion pounds more than was produced in 2017, and nearly 2 billion more than in 2016. One of the factors driving higher broiler meat production is a steady increase in the average weight of the birds slaughtered. Weights in January 2018 averaged 6.26 pounds, about one percent above a year ago, and more than 4 percent higher than January 2014. Broiler weights tend to follow a cyclical pattern, peaking during the late fall or early winter and achieving their lowest average weights at the height of the summer, but they have shown year-over-year gains in most months over the past 5 years. This chart is from the Livestock, Dairy, and Poultry Outlook newsletter, released in March 2018.