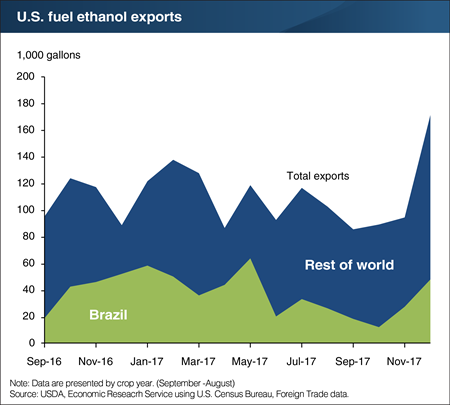 Last year, the Brazilian Government announced a tariff rate quota for ethanol imports, where imports in excess of 600 million liters are subject to a 20-percent tariff. However, U.S. ethanol has been priced so low that it is still an economical alternative in Brazil. Currently, ethanol is $1.50 per gallon at the Gulf Coast Ports in the United States, while ethanol in Brazil is $2.32 per gallon. Demand for ethanol in Brazil is robust because of widespread use of flex-fuel vehicles and a mandate requiring a minimum of a 27-percent ethanol blend in gasoline. Due to price competitiveness and strong demand, Brazil, the second largest global ethanol producer, is also the largest overseas buyer of U.S. ethanol. One contributing factor is the internal distribution of ethanol in Brazil. Ethanol mills are mostly located in the sugar producing areas of southern Brazil. Because of infrastructure constraints, it is cheaper to ship ethanol by boat from the U.S. to the northern regions of Brazil than by overland transport through Brazil. Some new ethanol mills are located in Brazil’s northern corn-producing regions. An expansion of corn ethanol production in Brazil would likely make U.S. ethanol less competitive. This chart is drawn from the ERS Feed Outlook newsletter, released in March 2018.