U.S. egg imports surged during and after the 2014-15 highly pathogenic avian influenza outbreak 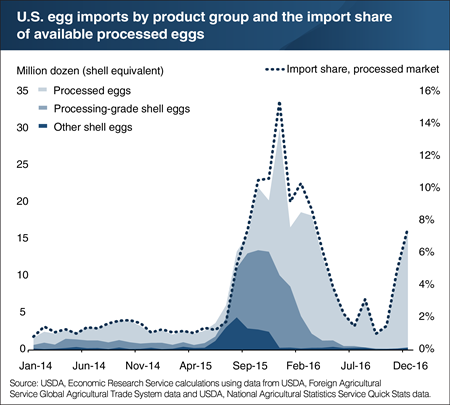 The 2014-15 highly pathogenic avian influenza outbreak had a widespread impact on the U.S. poultry sector, hitting egg producers the hardest. The outbreak resulted in the loss of roughly 12 percent of the total U.S. table-egg laying population, which limited production and drove up domestic wholesale prices for all egg grades, including those used for processing by restaurants, bakers, and other food manufacturers. During this period, egg market supplies were bolstered by a very large increase in imports, including shell eggs graded for processing as well as liquid and dried egg products. Before 2015, these imports were marginal, attributable in part to rigorous country certification standards and less competitive prices due to typically robust domestic egg production (the Netherlands, for example, had to recertify after allowing their certification to lapse). After the outbreak, however, monthly imports of these items peaked above 15 percent of the processed eggs available domestically. As production recovered and domestic prices returned to pre-outbreak levels, U.S. egg imports returned to more stable levels, falling by 74 percent in 2017 to total 32 million dozen, just 2 million dozen more than the single month’s total in December 2015. This chart appears in the ERS report, Impacts of the 2014-2015 Highly Pathogenic Avian Influenza Outbreak on the U.S. Poultry Sector, released in December 2017.