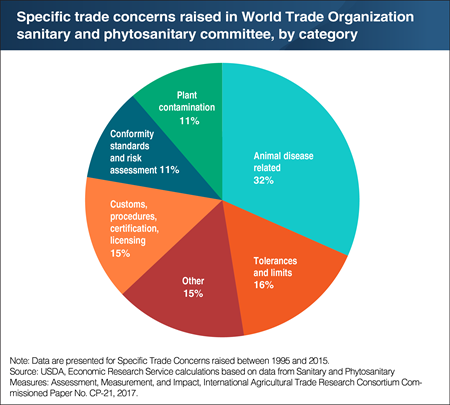 Sanitary and phytosanitary (SPS) regulations play an important role in ensuring food safety and protecting animal and plant resources. But such regulations are sometimes imposed improperly with countries favoring domestic producers and discriminating against imports from others. If a member country of the World Trade Organization (WTO) believes that a trade policy of another WTO member violates relevant agreements, it can initiate a dispute settlement case with the WTO’s Dispute Settlement Body. In the case of sanitary and phytosanitary (SPS) measures, a member country can inform the WTO’s SPS Committee of its concerns about a particular measure. Many of these concerns—officially called Specific Trade Concerns (STCs)—are resolved before they escalate to the level of a formal dispute. From 1995 to 2015, the most common STCs brought before the WTO SPS Committee were related to trade measures imposed because of animal disease issues. This large share reflects strong growth in meat trade along with occasional animal disease outbreaks such as foot-and-mouth disease and bovine spongiform encephalopathy that gave many countries a rationale to restrict imports. Following animal disease-related concerns, the next most common concern was pesticide tolerances and maximum residue limits. This chart appears in the February 2018 Amber Waves feature, "World Agricultural Trade Experiences Sizable Growth but Still Faces Barriers."