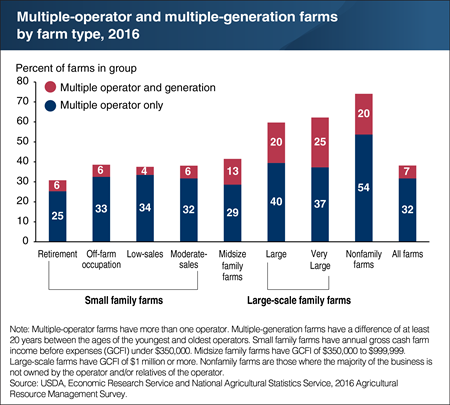 Commercial-sized farms often require more management and labor than an individual can provide. Additional operators can offer these and other resources, such as capital or farmland. Having a secondary operator may also provide a successor when an older principal operator phases out of farming. In 2016, nearly 40 percent of all U.S. farms had a multiple operators. Because nearly all farms are family owned, family members often serve as secondary operators. For example, 64 percent of secondary operators were spouses of principal operators. Some multiple-operator farms were also run by multiple generations, with a difference of at least 20 years between the ages of the youngest and oldest operators. These multiple-generation farms accounted for about 7 percent of all U.S. farms. Large-scale family farms and nonfamily farms were more likely to be operated by multiple generations, at about 20-25 percent of those farms. However, the operators in nonfamily multiple-generation farms were likely unrelated managers from different generations. This chart appears in the December 2017 ERS report, America’s Diverse Family Farms, 2017 Edition.