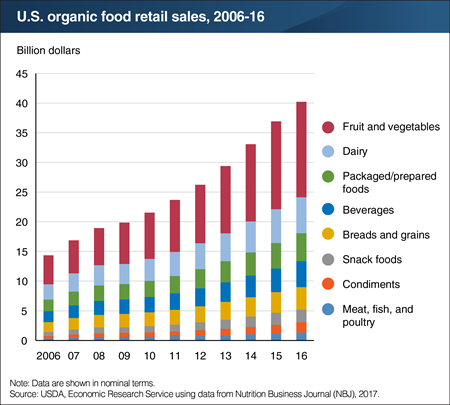 Although U.S. organic food sales account for a small share of total U.S. food sales, they have exhibited double-digit growth during most years since 2000, when USDA set national organic standards. In 2016, the Nutrition Business Journal estimated U.S. organic retail sales at $40.2 billion—with organic food accounting for about 5 percent of total U.S. at-home food expenditures, more than double the share in 2006. Organic sales in every food category have grown over the last decade. Fresh fruits and vegetables were still the top selling organic category in 2016, accounting for 40 percent of total organic sales that year. Dairy, the second top selling organic category, accounted for 15 percent of total sales. In 2014, Gallup included questions on organics in its annual food consumption survey for the first time and found that 45 percent of Americans actively tried to include organic foods in their diets. The share of Americans who actively tried to include organic foods was higher (over half) for Americans ages 18 to 29 than for those ages 65 and older (one third). This chart updates data found in the February 2017 Amber Waves feature "Growing Organic Demand Provides High-Value Opportunities for Many Types of Producers."