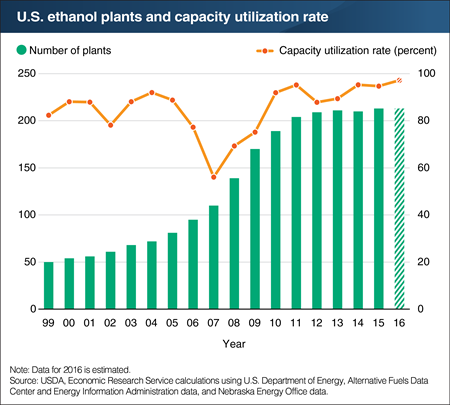 The number of U.S. ethanol plants more than quadrupled since 1999, as demand for ethanol has increased. This growth in the number of plants is driven mainly by the Renewable Fuel Standard program, which was first enacted in 2005. The initial increase in plant numbers after 2005 led to reduced capacity utilization with some plants not producing at their full potential. Since 2011, the number of new plants has generally remained level, allowing for production growth to be achieved through maximizing present capacity utilization. As of 2016, existing plants were operating at roughly 97 percent of total capacity, translating to over 15 billion gallons of ethanol produced. While such a high number might normally signal demand for new plants, limitations on the amount of ethanol that can be blended with gasoline in existing vehicles is effectively limited to 10 percent. Combined with lower gasoline consumption due to greater vehicle efficiency and lower miles driven, further domestic ethanol demand has been constrained. Because of these constraints, additional ethanol production is primarily intended for export markets and is sensitive to competition with the price of gasoline, which has fallen significantly since 2014. This chart appears in the ERS report Global Ethanol Mandates: Opportunities for U.S. Exports of Ethanol and DDGS, released in October 2017.