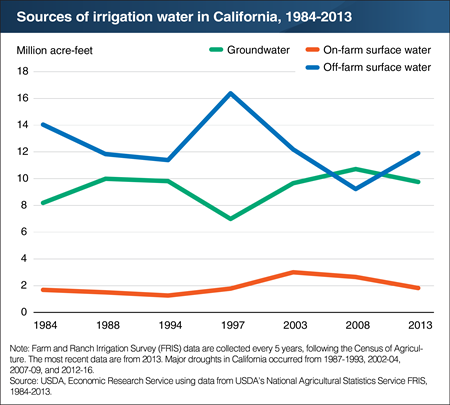 Prolonged drought generally results in large reductions in the quantity of surface water delivered, affecting farm production systems that depend heavily on surface water for irrigation. Groundwater may substitute as a source for irrigation water when the availability of surface water declines. For example, although most farmers in California’s main agricultural areas rely on surface water for the largest share of their irrigation needs, many parts of the State have sufficient groundwater reserves to provide a partial buffer against the impacts of drought. However, recurring drought and groundwater “overdraft”—when the amount of water extracted is greater than the amount of water entering the aquifer—have resulted in large declines in aquifer levels in some areas. This chart appears in the June 2017 Amber Waves feature, "Farmers Employ Strategies To Reduce Risk of Drought Damages."