U.S. agricultural exports and imports in the 2018 fiscal year are forecast to closely mirror 2017 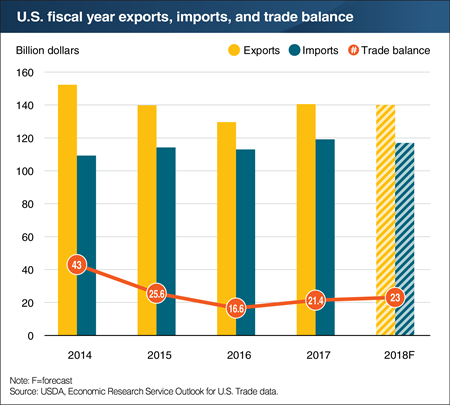 According to the latest USDA trade forecast, the 2018 fiscal year will look similar to 2017, but with a slightly higher trade balance (exports–imports) because of lower imports. Total agricultural exports are expected to value $140 billion dollars along with $117 billion dollars in imports. Taken together, the trade balance would reach a surplus of $23 billion compared with 2017, when the balance was near $22 billion. Both years mark a slight improvement over 2016 when exports and imports both fell, leaving a surplus of just $17 billion. Prior to 2015, the United States had a consistently higher trade balance, driven by lower total imports. This is largely due to appreciation of the U.S. dollar as the country’s economy recovered from the Great Recession. The 2018 forecast is driven by expectations of high demand for U.S. exports of corn and soybeans and their products. This chart is drawn from the Outlook for U.S. Agricultural Trade report, released in November 2017.