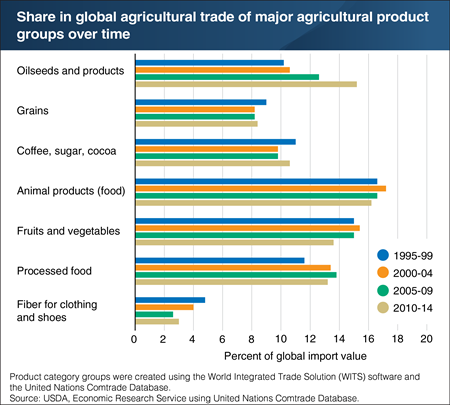 Among the product categories that make up the largest share of global trade value, movement in average import shares has varied with some products growing in significance and others declining. Over the four 5-year periods measured between 1995 and 2014, oilseed imports (bulk commodities) and their products (intermediate commodities) had the fastest growth in share of total value. In contrast, the share of trade in two bulk product categories—grains and tropical commodities (coffee, sugar, and cocoa)—declined over 1995-2014. For consumer-oriented products, the share of animal products, fruits and nuts, and vegetables in global agricultural trade declined slightly, while the share of processed food increased. Fibers, particularly cotton and others used for clothing, witnessed the steepest loss in share of total agricultural import value. Cotton consumption peaked in 2007 before falling off. China, the largest consumer of cotton fiber, reduced its imports beginning in 2012 to rely more on domestic production and carried over stocks from previous years. The growth in oilseed trade and their products has been one of the most significant developments in the global trade landscape, driven by growing imports from China and India and export growth from Southeast Asia and the Americas. This chart appears in the ERS report, The Global Landscape of Agricultural Trade, 1995-2014, released in November 2017.