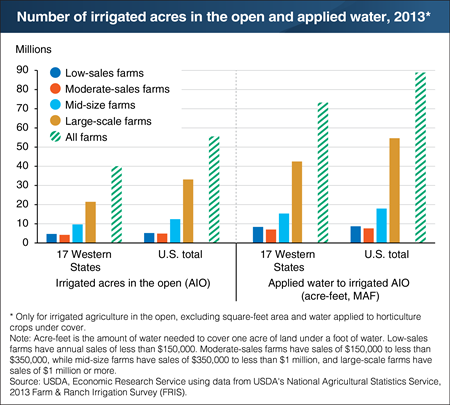 In 2013, large-scale U.S. irrigated farms, those with $1 million or more in annual farm sales, accounted for most (about 79 percent) of the value of irrigated farm production. Large-scale farms also accounted for over half of the irrigated acres in the open (AIO) and about 60 percent of applied water. These farms dominate these characteristics largely because their size allows them to spread costs over many more acres. For example, in the West, irrigation pumping costs per acre for large-scale farms generally average about half that for low-sales farms, those with under $150,000 in farm sales. In total, U.S. farms irrigated about 55.4 million acres, which required the application of more than 88.5 million acre-feet (MAF) of water—equivalent to about 28.8 trillion gallons. The irrigation of AIO accounted for nearly all the water use (98 percent). Crops irrigated on AIO include corn, wheat, and soybeans as well as vegetables, berries, and nut trees. This chart appears in the June 2017 Amber Waves data feature, "Understanding Irrigated Agriculture."